saying how do you do

In these times of austerity it's sometimes hard to see any positives, but I, for one, have learnt to be less wasteful. Which can only be a good thing. Take these little Moleskine Volant diaries, and for that matter the Staedtler pens, they have been sat on my bookshelf, and in my pencil case, for a couple of years. They would still be there had I not imposed a new 'no more buying sketchbooks or pens until I've used up some of the stuff that I already have' rule (I'm sure there's a catchier title for that rule but, as yet, I've not found it).

As, I said in a previous post I was never quite sure what to do with them. In my opinion, they are impractical as diaries. Anyway, I've come up with the answer; TV drawing. 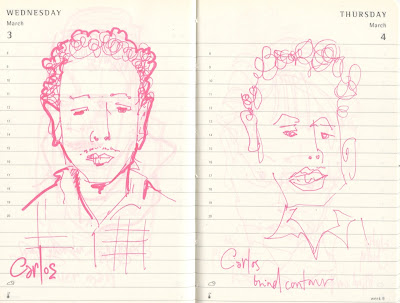 When I'm not doing my usual highly laboured drawings I like to teach myself new things. When it comes to drawing I want to learn learn learn.

The funny thing is, when I was a kid I only ever drew people. Every time I doodled it would be people I'd doodle. Somewhere along the way I stopped doing that. Then when I took up drawing again, a few years back, I focused on objects and the everyday thing that we surround ourselves with. 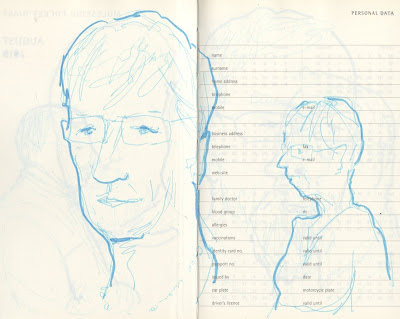 So, I've been getting back into drawing people by doing these very quick sketches whilst watching TV. Sometimes I get totally carried away with it. Sketching every face that pops up on screen. I think I've filled about ten of the little Volant books so far.

I think I've learnt a lot by sketching in this way. It's almost the opposite to the way I normally draw. You never know how long that person has on screen so you have to work fast. 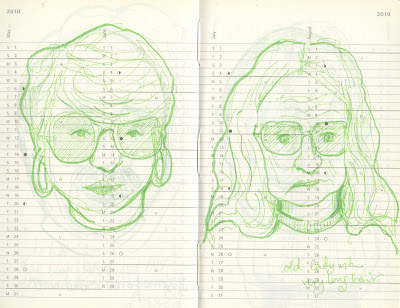 It's also good for those of us who might not yet be confident about sketching 'real life people'. Nobody is going to say "I don't look like THAT"!

Obviously, there are some programme's that are better than others. Some of my favourites include Mastermind (each contestant/model sits for two rounds, and you get two different camera angles), BBC News 24 (for the news reader and people they interview), Judge Judy (the camera focuses on both the plaintiff and defendant for a good length of time plus you feel less guilty about watching it if you have a reason like drawing), Question Time and I actually believe that I must be one of the only people in the country (I've never met another one yet) who watches the Parliament Channel. 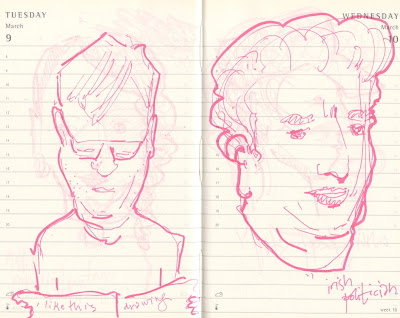 There is the odd occasion when I do pluck up the courage to draw a 'real life human being' but it does help if they are asleep! 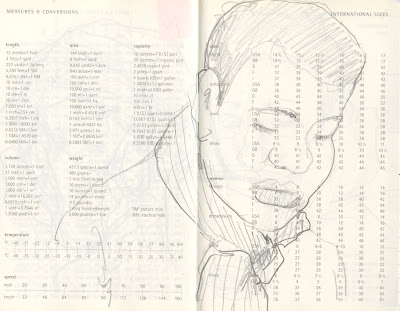 The train to Sheffield

I've uploaded a whole bunch of these people sketches (portraits, even!) to Flickr. You can see them HERE.
Posted by andrea joseph's sketchblog at 4:06 PM

very cool. if I were to draw TV people in America, it would be politicians because they are all over the TV in this political season. Hmmm. Might have to give it a try. Love your sketches of things or people...always

I'm trying to work on the two out and one in philosophy with my crafts - hopefully they'll work for your notebooks too - and you won't end up feeling too deprived :)

Tv drawing!!!!! I must try this. When it's TV time at home (like ATM) I sit and listen to the programme and do something else like read blogs, books, magazines etc but all along I could be drawing AND watching tv like everyone else. I'm going to set aside one of my many sketchbooks and do this!

Oh, I love to draw TV people. My personal favorites are Latin Channels - I don't understand a word and faces are so expressive!

Do you draw strictly with the pens you've assigned to each notebook?

I've had the same rule in effect for quite some time. I did recently break it to buy a small notebook for a trip however.

Sometimes I've drawn from tv or from a movie, but I use Freeze Frame on the remote so they stay put.

I don't watch a lot of TV and what I do watch needs my attention(or I'll miss vital murder clues!), but I did grab a pencil on election day yesterday. Posted the result on the blog.

I have been drawing in court, as i have to go there often for my day job and usually sit thru a trial while waiting for the one i'm there for, i never thought about tv drawing though, as always your blog is inspiring!

Oh that´s a great idea!!
I like to do something else at the same time as I watch tv.
I usually sketch or knit, but I have never thought of drawing what´s on tv!
I will try that this evening :)
Have a great day!

What a really great idea for doing character sketches!

I'm so pleased to have inspired some of you. I thought everyone was doing it; tv drawing that is!!!

I too have made the "use the sketchbooks I already have before buying anymore" pledge. I seem to be doing a lot more sketching, and less shopping!

Lovely work. Thanks for the blog.