i'm going to wait until the morning comes 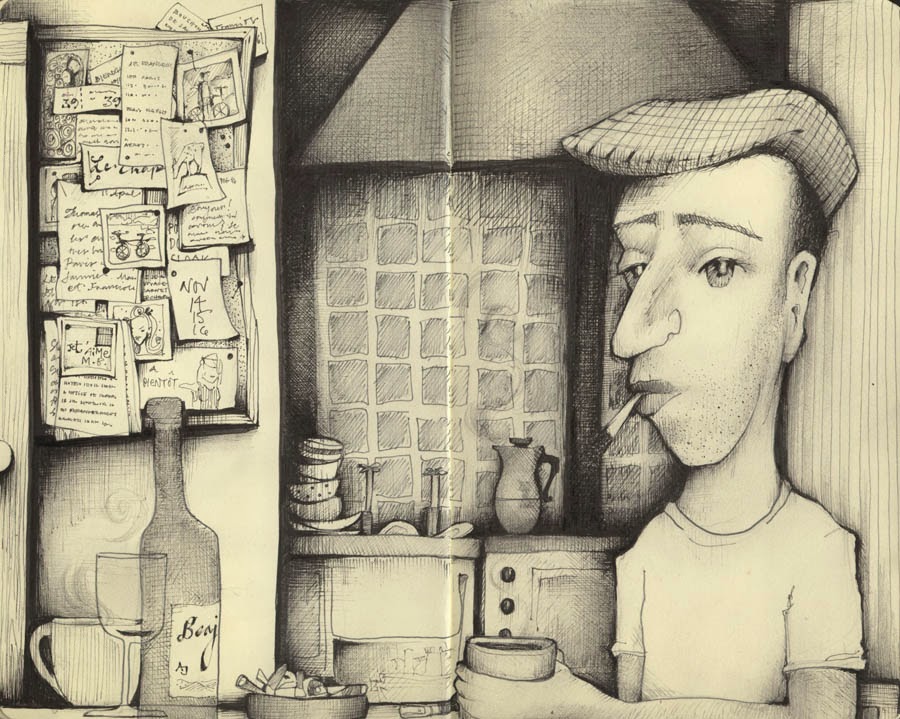 Here's a new drawing. Brand new. I'm really happy with it. It's one of those drawings that reminds me of why I draw. If that makes any sense?

It's an example of one of the processes I use when coming up with a piece of work; sometimes a drawing will just pop into my head. Fully formed. I have no idea where it came from, or why it came, but suddenly it's just there. Then it waits around for me to put it onto paper. I sometimes try to ignore it, but when it's there it's there. It doesn't go away.

So there he was. This French guy sat in his kitchen, feeling a little fragile, after a night of partying. Fag in mouth, coffee in hand. It took me 2-3 years to get around to putting him on , but a couple of days ago I picked up my sketchbook and within 2-3 minutes he was born. A few hours of cross hatching followed.

I based the character on a guy I met a few years back in France. He wobbled up to this sophisticated artist's award ceremony/party, on his push bike, in a flat cap and old coat, fag in mouth looking a little wasted and yet sickeningly stylishly European. He then made his way around the place, taking advantage of the free booze. I immediately thought "that's the guy I want to party with".

And we did. And it was a great night.

There's this Ray Davies quote I heard when watching a documentary on The Kinks, that has always stuck in my head. Well, if it wasn't a Ray Davies quote it was by his brother, Dave (?). It goes "It's not how something is reported, it's how it's remembered. That's what they call poetry".

I love that quote. It's also why I love this drawing.
Posted by andrea joseph's sketchblog at 1:49 PM 7 comments: 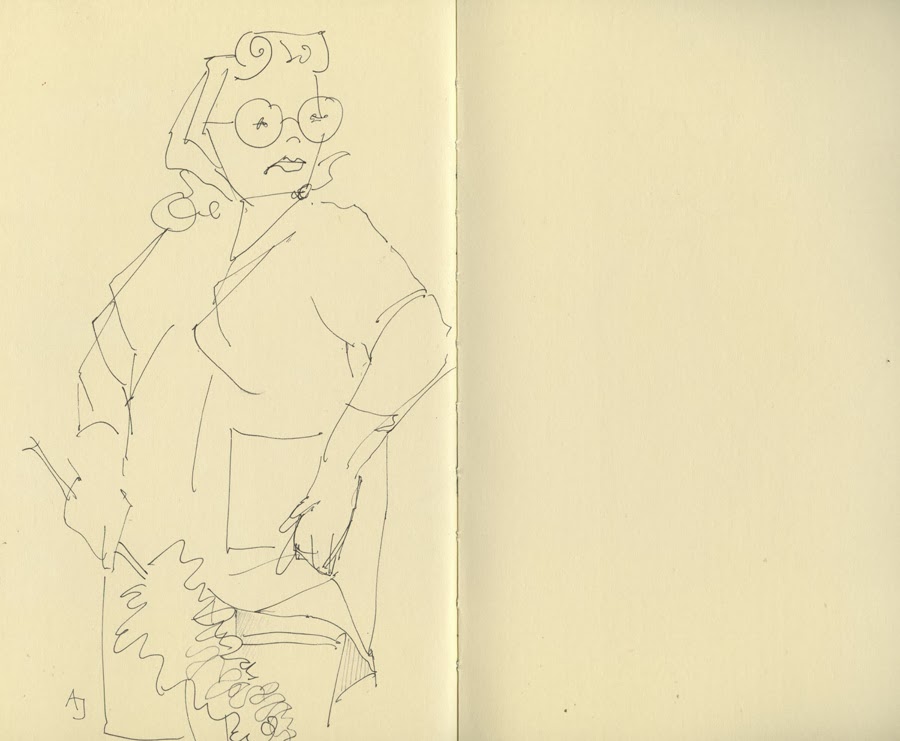 A sketch in three stages. The original line drawing, above, I made at our most recent Dr Sketchy Sheffield event featuring Burlesque dance troupe The Yorkshire Puddings. 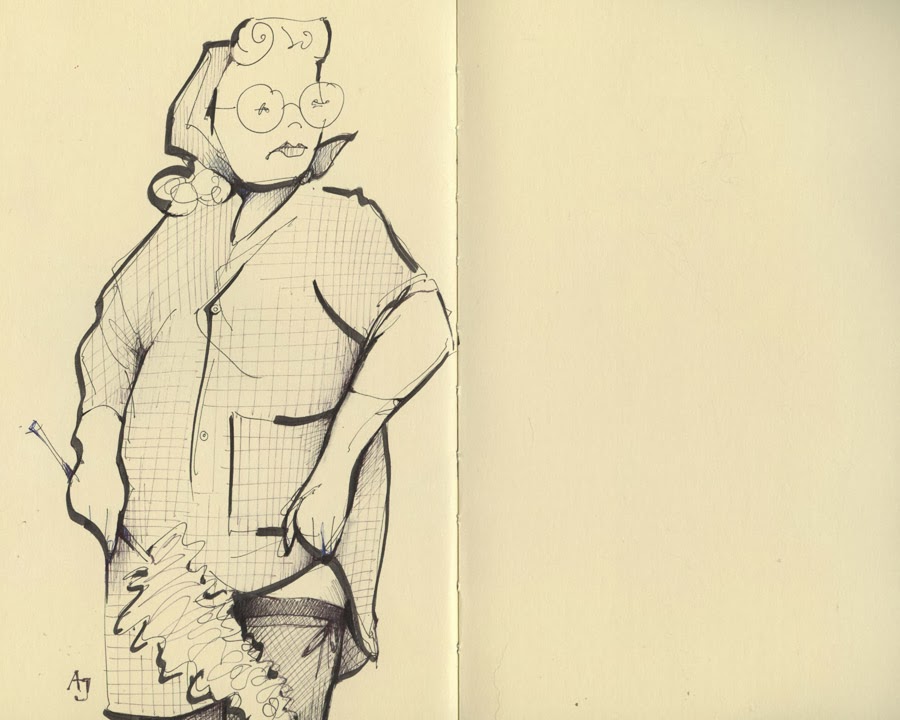 In the second stage I added a little shading, in the form of cross hatching, and some stronger lines. 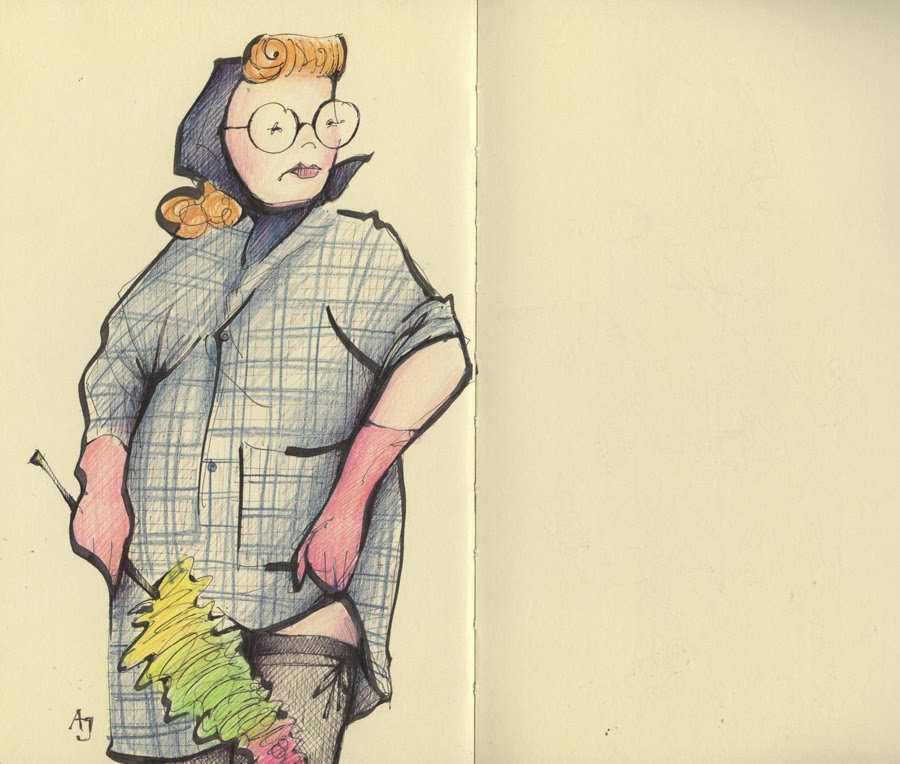 Then finally with colour - for which I used colour pencil. Maybe I shouldn't have bothered. I think I like the original line drawing the best. Oh well.
Posted by andrea joseph's sketchblog at 3:50 PM 5 comments: