the world of ideas is also changing 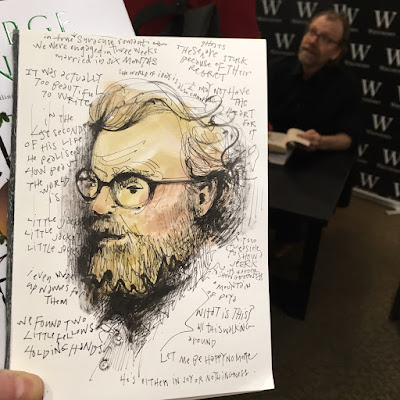 Recently I got to see (hear) author George Saunders, talk about his new book: Lincoln In The Bardo. I made this sketch whilst listening to him. It doesn't really look like him, but, oh well. I really enjoy this kind of work; capturing what people say and the whole combination of text and pictures thing. As part of my work as an illustrator I get to do this. I get to go into places where cameras may not be allowed (eg, prison) and capture what's going on, in sketches and words. It's hard to keep up with people talking so you end up with bits of the conversation. I like to think that the words I do catch are the important ones, but to be honest, I think that is a romantic view of it. More often than not, it's just picking up bits of prosaic conversation. But, I still like that. It's still significant, I guess.
Hmmm, still a romantic view? Look, just read this instead, it's more interesting than anything I can come up with. It's late and I should be in bed.
Posted by andrea joseph's sketchblog at 11:25 PM 5 comments: 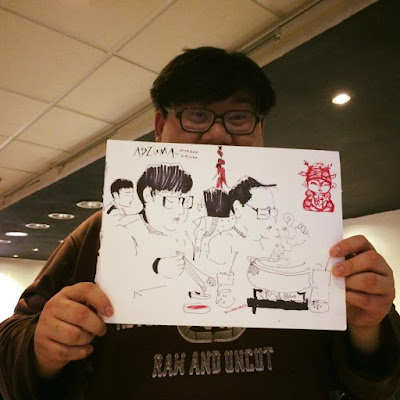 Above is my favourite drawing related photo. Ever. I just love it. It was taken in a Korean restaurant in Manchester. I'd made the sketch, below, of the guys on the next table. They knew I was sketching them and were giggling throughout at the idea of being sketched. When I finished they asked the dreaded question; "can we see it?" 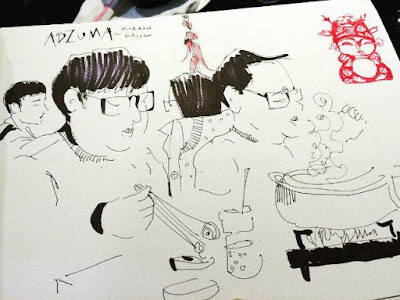 I say dreaded question, because when I speak to people who are just starting out drawing in public, and specifically drawing people, that's the number one question. Has anyone ever asked to see the drawing? And, the second question is WHAT if they don't like what you've drawn? 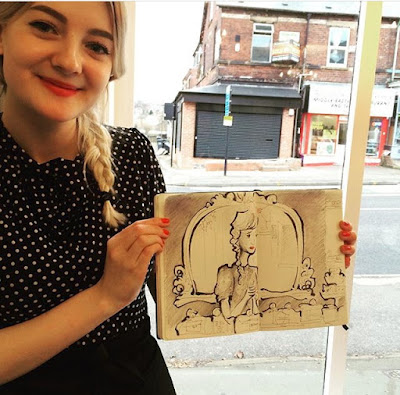 And, you know, it's a totally valid question. One that I ask myself when I know I've been clocked drawing somebody. WHAT if they ask to see it? WHAT if they are offended? WHAT if they hate me for it? Because, lets face it, it is in a way a bit of an invasion of their privacy. They didn't ask to be sketched. I am always aware of that. If I wasn't in the illustration game, and somebody had made a sneaky sketch of me, how would I have liked it? 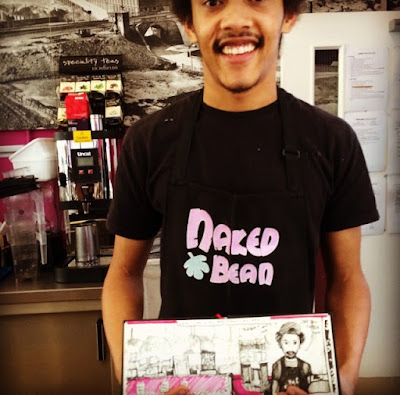 So, that's all the concern, paranoia and anxiety out there. It's real. Those thoughts exist. So how do you get over that? I don't have the answers, I'm afraid. I'm not sure there are answers. There may be times when people aren't exactly chuffed. Lily, below, didn't seem that impressed (but actually, she was just being a great model and sitting amazingly still for me). The guys below her haven't quite made their minds up. In fact, that was really great fun drawing them and even if their views and critiques were brutally honest, it didn't take away from it being too much fun to have missed out on. 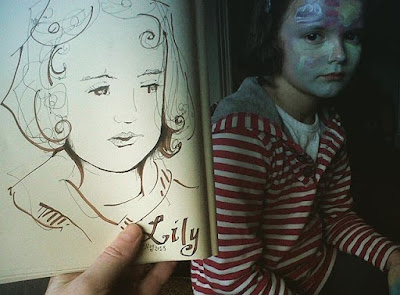 A week or so ago, I went into a café where I'd been drawing quite a lot recently. I'd put one of the drawings, that I'd made there, online. The girl in the drawing was there telling her work colleague about it. As I began a new drawing I was aware that they were talking about me and what I was doing. I spent the whole time being really paranoid. They probably hated the drawing I'd put online. They probably don't want to be in this one. More than likely they were going to come up to me and tell me to stop it or to get out. I spent the whole time a anxious wreck. When I went to pay the girls said "we love your drawings, they're really beautiful". Bugger. And I just spent that time listening to my thoughts and wasted the opportunity to create something else they'd have loved. 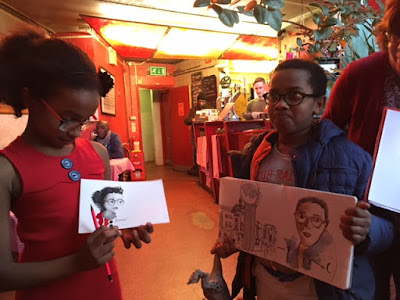 Thing is, for most, the reactions to my drawings of people have just been pure delight. The comment I hear most, from those who have been drawn, is "I've never been drawn before". And, "can I take a photo of it?" Oh, and, "is it okay to make it my Facebook profile picture?" These cheeky monkeys below brought all their neighbourhood kids out to get drawn. 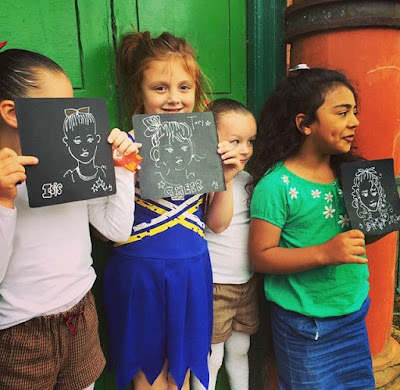 Seriously, you'll be surprised how positive the response is. As always, the only way to get more confident about it, is to practice. But, whether people are happy to sit for you, or if they don't even know they're posing for you... 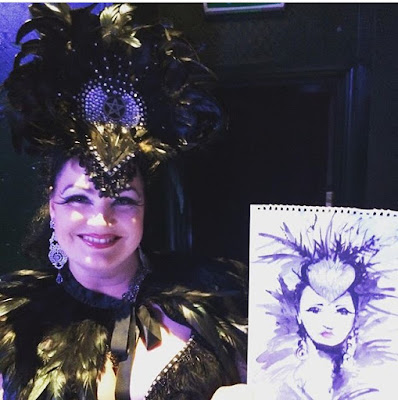 ...if you don't do it you'll miss out on some of the greatest reactions to your drawings. My advise (not that you've asked for it, and I'm no expert) is that it's worth the risk. Be brave it's worth it. For me, the photos in this post are proof of that. It's the best feeling when you get that person to pose with their drawing. THAT, to me, is the money shot. 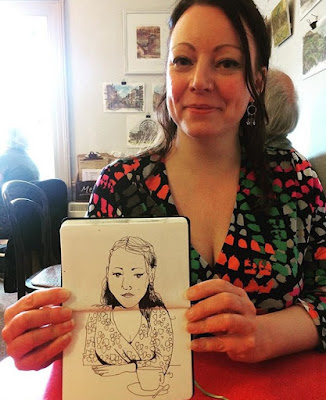 And, I lied when I said the photo at the top was my all time favourite. This is... 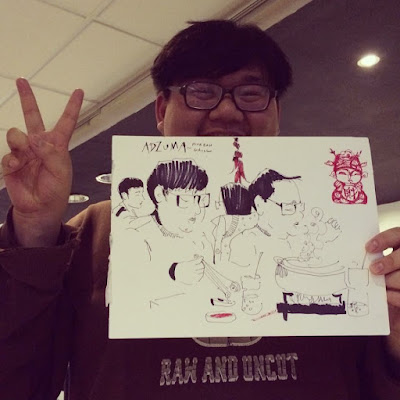