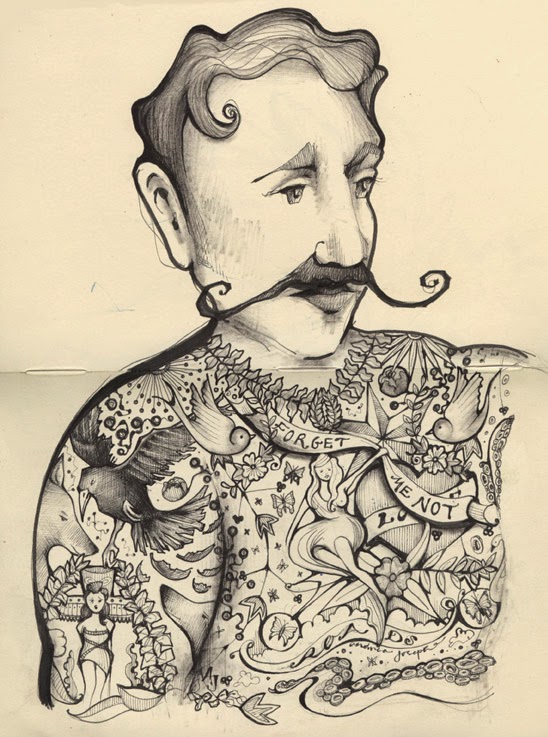 Here's just a little (it's all relative) something I knocked up in my sketchbook.
The story of the drawing goes a bit like this...
Sometime back in May I went to my friend, and Dr Sketchy partner, Lara Gothique's fabulous vaudeville extravaganza (I do love that word, extravaganza. In fact, I love both of those words; vaudeville and extravaganza) called Cupid Stunts. I sketched the whole show that evening. I came away with a load of drawings. Over twenty quick sketches.
One of the fabulous artistes that night was a Victorian strong man called Sir Leopold Aleksander. I got a good handful of sketches of him. They were pretty much all as below - simple line drawings.
Over the last couple of weeks, as I have been living a life of sobriety, I seem to have a bit more time on my hands in the evenings. Time to do the things I've wanted to do for ages but not got around to because wine got in the way. Time to go back through my sketchbooks and rework some of those quick sketches that needed a bit of the AJ treatment. So that's what I did with the, now, tattooed gentleman above, and, at some point, will do with the sketch below. Sure, they don't exactly look like the Victorian gent, but that's what happens when you a) sketch in the dark and b) complete the illustration using only your memory and a lot of imagination. And, that's what I love about drawing.
Thanks to Sir Leopold for the use of his body(?!)
Thanks to Lara for her fabulous show.
And thanks to Go Sober For October for giving me the headspace to draw instead of drink wine!
If you can spare a bob or two please donate to my sobriety challenge. I am raising money for MacMillan Cancer Support. The most worthiest of causes. You can do that HERE.
And if you'd like to see a vaudeville extravaganza, and are in Sheffield next weekend (a long shot, perhaps), Lara is putting on another. Check it out HERE. Take your sketchbook! 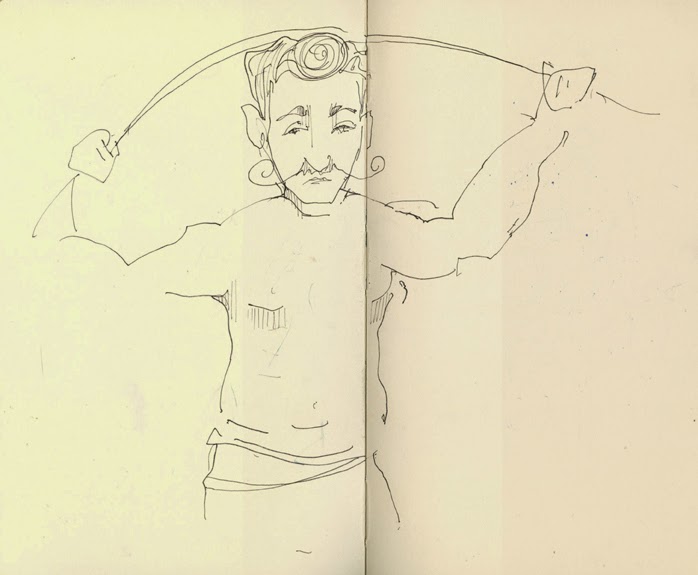