the fear of a people sketcher 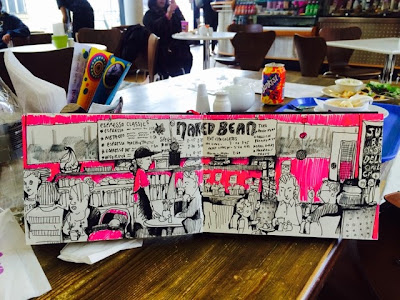 Yesterday I went back to Gallery Oldham where I'd previously done research for the Museum job that I've talked about in my last posts. This time though I returned for a little mini sketch meet up with some friends.
When I was there last time I made this sketch, below, of the guy who worked in the gallery's lovely Naked Bean cafe. It was a sneaky sketch, I didn't show him but I did post the sketch on Twitter and the cafe saw it. They said that he loved it - even though i'd made him look pretty grumpy in it. Which he wasn't. He was the opposite to grumpy.

Anyway, yesterday, when I returned and with the knowledge he was happy with the sketch I took the opportunity to get a photo of him with it. He said "I've never been drawn before. It made my day. I put it on Facebook and everything". 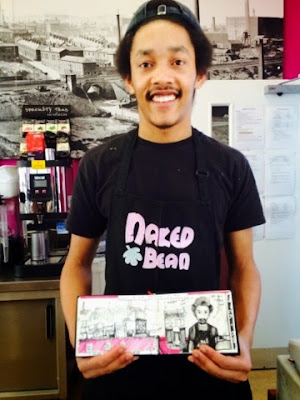 I think the fear for all of us that sketch people is their response to it. Will they be offended? Will they hate it? I know it's my fear which is why I don't often show them. But his response made my day. This time it paid off.
Posted by andrea joseph's sketchblog at 2:42 PM

I like his response! Nice sketch. It's hard to get out of our comfort zone sometimes.

I really like the photo of him holding your illustration. Thanks for sharing your fears that was very helpful to me.

Look at that happy face - You made his day!

isn't great that what you do for your own satisfaction actually made people happy? it's the most awesome feeling :)