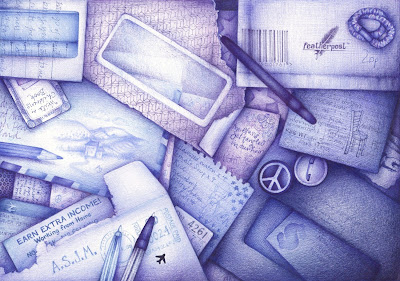 i love that journey, too. thanks for taking us along on yours. the drawings are beautiful!

oh wow, there's so much work in this!!
I love how you can keep spotting an extra little detail in there, and I loved seeing the progression. You've got me motivated!!
How's your hand?!

Thanks for posting this in all its stages! Wonderful to see the progression and to read how you allow for the drawing to happen. Beautiful drawing!

I think you did pretty good, Andrea. Like the composition and the colored pencil. Thanks for the step by step along the way.

Andrea, our go-to girl for the details. You are unBEATable!

this is very cool, NO wait its fascinating...all the plethora of details...so very well done too...bytw whats a biro? ball point pen...anyway cant wait to see what ou do next i know it will be spectacular

I love this! It has such depth, I could just reach into the picture and pick up one of the pieces! I love the different shades of blue, and I think you did an awesome job! Marva

WOW, I love coming back to see the progress. I tip my pens and bow down to you.

It looks awesome. The ruler with its transparency looks incredibly real. I'm floored each time I see your work!

Not for the first time, I'm amazed by your skill with a ballpoint pen. Mr Biro himself could never have envisaged such artwork from his invention!
Beautiful work, Andrea. Thanks for answering my previous question. x

This is just wonderful! The right hand corner is too blue, too much shadow? I just thought you had it in shadow from the lamp overhead. You use only ball point pens? Is this work in your Moleskine or art paper? I wanted to know the brand of paper you used.
Some Rubbish, you had to finish.
Just a delight for eyes.

Lexy it's itching to get started on the next - butI'm definatley taking a couple of days off!

Margaret, a Biro is, indeed, a ballpoint pen. It's the brand name.

Sherrie, well I'm glad you think it looks like the shadow and light of an over head lamp, because that's exactly what I was going for. It's just the colour of the blue in the right hand corner is wrong. It's very subtle and probably only I'd notice, but that's what happens when you're obsessive!

This piece is on paper. It is a Windsor and Newton heavy weight cartridge. It has to be heavyweight, to take of all that cross hatching.

I absolutely adore it. Thank you for showing us a work-in-progress. The finished piece is wonderful. I love it.

As much as I enjoy this drawing (and I really do!) I also like what you've written to accompany it. Your reflecting back on the process and the final outcome is really interesting, and probably mirrors what many of us feel about our work as well. Although I think you've said it more eloquently than I might have!

Your talent is awesome, thank you for sharing

Thanks for taking the time to share the process. Truly fascinating! Your patience and talent amazes me!

I deeply admire what you do! Such talent and patience! It is always a joy to see what you have done next. You shared the process with us this time!! What a journey! Thanks so much! :)

I so enjoyed seeing your work in progress, Andrea! An amazing finish, as always....and your attention to detail always blows me away.

Wow, wow, wow! I just love everything you do! Thanks for sharing the progress. It was so cool to watch!

Gosh how i love the allegory you used about being the passenger. I happen to LOVE the dark area starting in the bottom right corner. It adds depth to the whole piece. I love it. I LOVE it.

it never stops suprising me what you can do with a piece of paper and ball point pen...
thank you for sharing your amazing journey:)

Hi, it's me again... Just to say I sent you an award on my blog, and you're free to participate or ignore it! I just had to do it, your desk drawing,a few posts ago, really was a revelation for me! thanks again!

I love seeing the creative process to this piece and like all the contrast/shadow that you have created using a very limited palette. It's always interesting seeing the progression of a piece, but I also understand the need to finally hold it up and say "DONE!"
Thanks for sharing.

Thank you for your comments on my blog. :) Marva

My favorite part is the translucent ruler with the page underneath showing through. And if it was a hairband from around our house there would still be a number of my daughter's hair hanging on.

Brilliant. Am awestruck once again. Bl***y brilliant. Thank you for the step-by-step, I may never draw again ...

Thank you all so much, guys.
I probably won't be doing one of these again in a hurry.

The strange thing is, for me, my favourite bit is the very corner that I started off with. The little blue pen (actually it's all blue!), the Featherpost envelope and the hairband. I never saw that coming.

And, Rick, that is one of the little details I meant to put in but forgot - the hairs on the hairband. I also forgot the star in the window of the envelope. I could add them. Hmmmmm.

Thanks everyone, for joining me on this little journey. Ta.

Your description of the process reminds me of a passage in "Art & Fear" about the work itself dictating what is needed ... I would go merrily insane making something as detailed as one of your drawings. What a labour of love! I haven't viewed the stages yet so will rush off to look at those now.

This has been great to follow (especially I since I've been away and have managed to see all your last blog posts all at one go!) Looking forward to the next one! (and thanks again for all the flickr comments!)

Love the complexity, and that you shared the process. Really great stuff.

I gave you an award on my blog. You are a sensational artist. In accepting the award, you are not obligated to continue with the nomination of others, but it is fun and encouraging all at the same time!

Andrea, thanks for the peak into your creative process- the visuals & text. Splendid results

Love your work. The darker shadow gives the image a feeling of depth, I think it's great.

i'm glad to have seen the process. It turned out incredible! I think the choices you make in a drawing are spot on.
I've given you another of those awards that are doing the rounds, cheers for the inspiration!

i enjoy the final result. well worth the torture i would say. great job!

How can you be annoyed with perfection?????? I don't know how you do it, but you consistantly turn out beautiful, pristine, exact, detailed, interesting, exciting work. I love what you do.

With some time between me and this drawing I have grown to like it. Well, more than I did when I'd just finished it. But then, that's how it usually goes. Right?

Haaa, you know what this reminds me of? The desktop on JKROWLING.com
Check it out, its real nice

Getting a topaz ring as links london jewellery jewelry gifts from better-half is no lower than an awesome joy. discount links of london bracelets Many ladies do admire such jewelry sparkling through charms links of london their fingers. If you may get to own one as gift, links of london silver watches you will definitely appreciate such beauty and elegance for high class cheap links of london necklaces type of jewelry. Those who know what the actual worth of gemstones will links london pendants certainly love to have one added into their collection.