just saying it could even make it happen 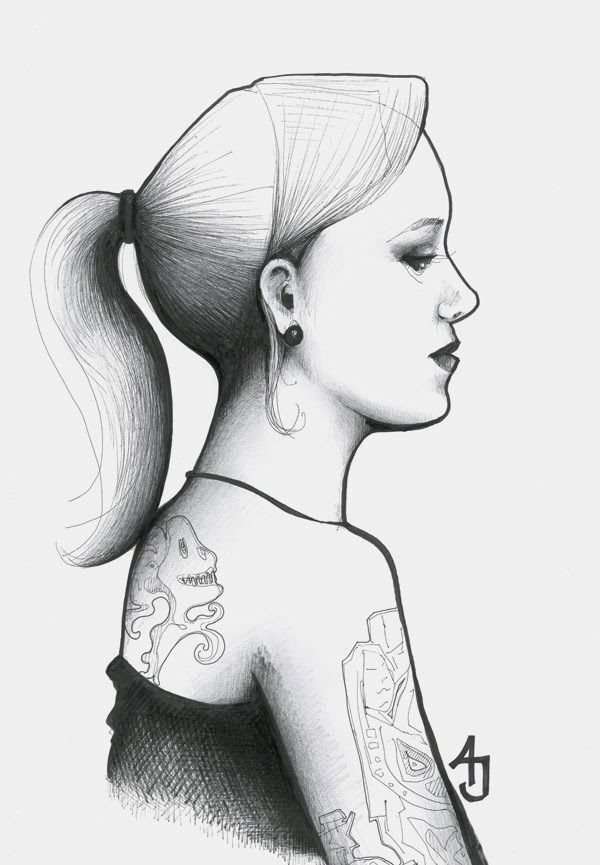 Natalie
Here are a couple of portraits that I made at our last Dr Sketchy Sheffield event 'Get Your Tatts Out'. They are both on A3 paper - which is why it's taken a while to upload them. One day I will get myself an A3 scanner and not have to cart them off to print shops to get them scanned. I'm pretty chuffed with both. I did them very quickly (they were 15 min poses) with marker pens. I did add some extra cross hatching, to Natalie, at home later. But most of the shading was done with a marker pen that's running out of ink - which is currently one of my favourite tools. No decent pencil case should be without a marker pen that's running out of ink! I've told you before; I ain't a pen snob. Anything goes. Alexis
And, the blog title? Well, to those with discerning taste, you'll know that's a Kate Bush lyric. I've just found out that I'll be going to see her in concert in September! Eeeek, eeek and more eeek. I never believed this would happen; a) she'd ever play live again and b) I'd get tickets.
Posted by andrea joseph's sketchblog at 6:34 PM

That's awesome that you'll get to see Kate Bush! Love these sketch-drawings!

Love these portraits! Lucky you, seeing Kate Bush - I worked out the other day I must have seen her just before she became a recluse. I worked at the BBC and snuck out of my office to watch her record some songs for a music programme. Enjoy the concert!

I just recently started art journaling and came across your work on Pinterest and it is so awesome to me that you can do that. Love it. Inspiring in a way that I could never do that but that I might be great at what I want to do creatively one day.