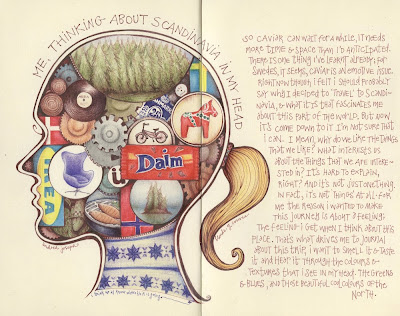 This is an X-ray of my head right now. That's exactly what's going on in there at the moment. I get into a project and I live and breathe it.

I was hoping to post this drawing over the weekend but it took far longer than I'd anticipated. I reckon there's, at a guess, around 16-20 hours work in this spread. I suppose in the grand old scheme of things that's not so long. When you think of how long people take making books or albums then it's a drop in the ocean.

I often think about such things, like the making of an album, when late at night and the world is dreaming and I'm scribbling away creating this crazy stuff. I suppose it's a way of comforting myself. Have you ever seen the film about the making of a Springsteen album ('The Promise; The Making of the Darkness at the Edge of Town')? It's all about that crazy obsessive manic compulsive demanding compelling destructive beautiful creative drive. I bloody love that film, mainly because it reminds me that I'm not alone.

I also think that if I were making an album I would not want to listen to it for at least a year after it's completion. I'm just putting this sketchbook away for a couple of days now.
Posted by andrea joseph's sketchblog at 3:30 PM

I love this new drawing Andrea...your posts keep me going you know..:) I also think your handwriting is a major creative part of the whole creation and it's just amazingly consistent-like you!...I know NOW that working on a book is an enormous undertaking...my first bookis almost done and will be published soon-very happy day it will be...and when I get paid I will be able to purchase some of your fabulous prints!

Love this drawing! Wish my handwriting was as neat as yours :)

I love this soooo....much. It's one of my very favorite of all of your amazing pictures! Will you be offering it as a print?

Amazing drawing and now thanks to your recommendation I have a new movie to watch!

I draw to comfort my mind too, it has appeared to be the best way to do it.

Great drawing and it sums up how full our minds get with a single topic.

the next time my head is feeling jumbled I'm going to think of it like this, instead of a mess!

Thank you, all so much folks. I'm so happy that you like this one because despite being very tired of it at the moment (16 hours or more!), I feel it will be one of my faves in time.

Tahirih, I'm not sure but I am looking into prints currently - where you can choose your drawing and I'll get them printed to order. i think I've found a good high quality prnter.

Cheers, everyone. Watch the movie if you get a chance. It's very good.

Great work!! Love to be able to be as creative as this.

This is really strange, Andrea. I just saw this post a moment ago, but not 12 hours ago, I painted something very similar! Total Twilight Zone moment right now... http://www.flickr.com/photos/kahunna/6933218244

so clever. love this. love your work!

Sweden is a nice country and Swedish companies are in general very productive and environmentally conscious.