i feel there's something in the air 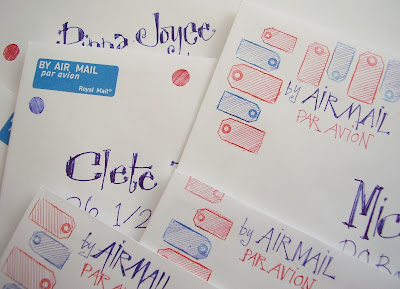 So whose bloody stupid idea was it to launch a new zine two weeks before Christmas? Oh, yeah, that would be me then. Anyway, it's about time I gave you an update on your orders and this is where I will be apologising profusely for the time it's taken me to get them out to you.

Now, I have a whole string of excuses for this zine being late - Christmas post, snow, away for Christmas, New Year, yada yada yada. My main issue, however, has been envelopes. You know, it feels like I have been living, breathing, sleeping and eating envelopes for the past two months.

It started when I first sourced this really gorgeous airmail envelope for this zine. They were perfect. Which was great pity as they don't actually exist. Because, it seems, that companies can advertise things for you to buy even though they don't actually have them in stock. How does that work?

I ordered this envelope from three different companies in the end. they all took my order and money but not one of them actually had it in stock. I rang every stationers in the United Kingdom. Nobody had them. It was so infuriating, especially as I'd tried my damnedest to have everything in place for when the orders came in. The original order for the envelopes was placed early November.

Look, I know it's only an envelope but by this point I was totally obsessed. Nothing else would do.

Anyway, none of that matters now. The envelope, it seems, was discontinued. So I had to come up with a replacement. Now, this is true; I ended up with plain white envelopes which, in blind panic, have all been personally doodled on and decorated by my own fair hand - all 200! I hope it goes some way to making up for the time it's taken. I really do because this little episode has taken two years off my life.

Every single zine, print and drawing ordered up to this date will be shipped by Tuesday. Many of them are already on their way. Then I am going to curl up in a dark corner and rock for some time.

Remember folks you are not just buying a zine you are buying a nervous breakdown in an envelope.

To buy 'How to Draw Like a Nut' click HERE.
Posted by andrea joseph's sketchblog at 5:10 PM

Labels: AJ, ballpoint zine, how to draw like a nut, zine

You're unbelievable and crazy (200?!) but in an incredibly selfish way, I'm excited that we'll be getting some original AJ doodling on our envelopes ;)

Very sorry to have sent you loopy. But then, if you will launch a new zine two weeks before Christmas...

Looking forward to seeing it in the flesh :) x

It's that attention to the detail which makes your art so fabulous, don't settle for anything less , and get in touch with those companies and give them a row! Or let me know who they are and I'll hunt them down for you... :-) XX

awwwww!! that is CRAZY you did that! But also awesome that you got 200 orders :)

Ahhhh! The life of an illustrator/designer -- we always meet out deadlines! Well done!

I'm really sorry you've been through this. I'm really looking forward to seeing my zine, but a few days or weeks one way or the other won't make much difference. But as Pippa said, it will be exciting to see original doodling. I'll save the envelope with the zine when it arrives.

I think your headache has been totally worth it. They look great!

OMG, Andrea!! What craziness, you poor girl. I'm going to cherish my zine, but I think I'll frame the envelope!:)
I can't wait to see it, I love my other two...
Cheers!!

Andrea, thank you for the update. I am sorry for the stress but am looking forward to receiving the zine. I have been home on medical leave and plan to return to work on Jan 13 (if expected snow storm does not make it impossible), so I look forward to a reward at the end of the work day.

Absolutely above & beyond! Blimey, what a traumatic time you've had, AJ!

I love your way with words, and your absolute sense of responsibility! You cannot be held responsible for silly salespeople who advertise stuff they haven't got.

You are amazing, Andrea, and I am SO looking forward to getting mine soon. And yes, the envelope will be treasured :)

The delay isn't a problem Andrea and now I'll have your envelope doodle to look forward to too. Yay!

Thank you folks. Thanks for your patience. I feel sooo ashamed!

I must stress that the doddled envelopes are only for the orders that I have in. I am not doing this forever! It's to make up for the wait. Ok, I'll extend it to any orders I have in by the end of the week.

You know, when I came up with this idea, for this zine, I thought I'd found a nice simple product - as opposed to my Molezines which are a bit more involoved because of all the bits and pices that come with them. nd all that queueing at the Post office. This one is a zine in an envelope with a stamp on. How could that possibly go wrong?!

Anyways, once again thanks for you patience. I'm gonna go and doodle on some more envelopes now.

OH! And, I've restocked the shop.

Hi Andrea. I love all your drawings! But i have a question. I'm drawing a tattoo for my arm. And everything is going to look more like a drawing, than a photo. And i totally loves your drawings. Is it okey for you, if i use some of you drawings motives? From Julie Sofi. (From Norway)
sofisverden@hotmail.com

Tee-hee. Your posts always make me giggle. Although, I do feel sorry for you, of course. 200 envelopes! There must be an award for this kind of customer service and dedication!
I'm so glad to hear you just sent them. I was already worried that mine got lost on its way or something, so that's a relief! :)
Hope your poor writing hand (and soul) are alright after all that! <3

Oh my, but now I will look forward to the envelope as well as the zine, you know. Can't wait for your doodles to show up here. :)

OhMy, this is great! I completely understand why you did it (believe me, I really do!), but you're crazy! It was already hard to wait for my package, now it will be a real torture!
Thank you for being such a talented and caring artist! :-)

Looking forward to getting mine, but honey, I'm sorry you stressed so much! It's all good....anticipation only makes it sweeter when it arrives, right?

Absolutely cannot wait to get thsi in the mail! One nervous breakdown please. ;)

Oh wow, sorry you had a nervous breakdown, but it is much appreciated, Cant wait for it to come and I also tell lots of people about your work so hopefully you will get some more orders. I will love the envelope and you may just have started off a trend, I used to decorate envelopes for my mum then the post men would hand deliver them to tell her what a laugh they had, I couldn't imagine doing 200 plus the others you have just promised.

Even though it's not funny when you're the one in the situation, it's a bit funny to watch. And although I feel bad for laughing at your nervous breakdown (and for you having a nervous breakdown at all! ;_; ), ohmigod I am STOKED to get the zine...and with a personalised envelope?! Yes please!! :D

Thank you all, so much.

Obviously do not have the time to be on the internet because I'm still doodling on envelopes.

I'll have them all on their way by the end of the week then I am going to celebrate by doing an actual drawing!

Cheers, my dears.
I appreciate your patience SO much.

Don't beat yourself up! We're all in this for the long haul. At least now there is a story to be told about this purchase. I'm touched by your passion and drive.

woohoo its arrived and I love it. I will have to go to the shops after work and buy some monkey nuts though. Thankyou and I love the envelope also and will consider it rare

I hope your talent is contageous but not the breakdown--how that made me roar ! I must now go eat something and then I will drive back and forth to the post office in the Hollow till it comes in---that will waste a lot of gas but qualifies me as feaverishly looking forward to the zines......

I am patiently waiting my Draw Like A Nut :) Thank you for sending it, i know you have been very busy as of late.

Will you resume telling us about your illustrations for the Jane Austen books and your own book? I would love to know more about your book!

Thanks for the informative. Fantastic blog. Congratulations!!!

Hey,
I gave you the stylish blogger award.
Go to my blog at http://the-writing-junkie.blogspot.com/

to see what you're supposed to do with it.

Thanks, I just received my 'nut' zine. I am enjoying it right now. Keep up the good work, I'd like to see another one.

Hi Andrea, do you sell softcopy?

WOW!!! Yippee!! I am so very excited!!! I just woke up from night shift and I have MAIL! The ROYAL Mail has made it to Canada unscathed. Your lovely hand doodled envelope is still pristine! I can't wait to pour over it once again in more detail when I have had enough caffeine that I can concentrate. Thanks very much I appreciate your efforts. All the best!!!!

while I bought your book for my son, whom also draws in ink in moleskins (he bought a HUGE one not long ago and is slowly falling in love with it) I get to keep the envelope!!!
When it arrived, instead of tearing it open, I slowly took in the perfection of the decorations!!! My oh my--turning it over and over, little circles all squiggled in, small bits of blue and red energy, swirling in place...
Then to see my name artistically drawn by another--and 'Royal Post' dotted on the front along with other postmarks made of dots....
Thank you Andrea!!
Son now wants everything else you publish, and perhaps I can sneak a photo of his work to you....
you've made two Texans very happy!!!

Hi!
Love my zine, envelope and everything inbetwixt. Just got them today and wanted you to know. It's a nice little addition to my andrea joseph collection.

I love your style and dedication :)

Hi Andrea, I'm a big fan. Just received your zine a few days ago.
Love it. I'm so interested in the making of it. Kind of paper, size.
And love the envelope too. Thanks!!

I can't tell you how happy your feedback makes me after the stressful time I've had with this one. I'm grinning with pride here. THANK YOU guys.

Kew, I don't sell soft copy. Maybe I will in the future but as yet I don't think I want to. I just love the idea of having something that isn't a deivice to hold. Some actual paper - just like back in the old days! I like to think it;s a more personal product (although, of course, 'product' doesn't sound very personal).

Once again, a huge thanks for your patience, peeps.

You make my day.