raising the spirit of peace and love 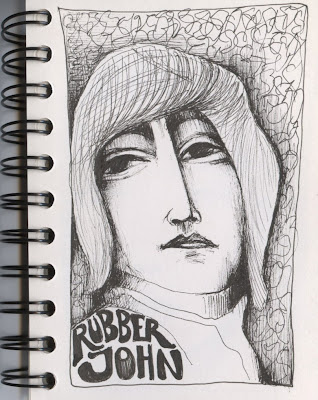 I've been playing the Plastic Ono Band album for about 6 months now. I'm completely obsessed with it. And, it hadn't even occurred to me that there were two significant anniversaries taking place this year. It's hard to imagine John as a 70 year old man. I guess he'll always be 40. And then there's today's anniversary. 30 years since his death. I remember hearing he had died before I left for school. I didn't know then how much he would come to mean to me later in life when I fell in love with music and, of course, the Beatles.

When I came into this world the Ballard of John and Yoko was top of the charts. That makes me happy.
Posted by andrea joseph's sketchblog at 11:47 PM

So sweet! How lovely to enter into life with John's song. Mine was "It's only make believe" by Conway Twitty.

supeerr , i love the font that make it such psychedelic look
:)

I must be just a bit older than you, Andrea, when I first heard the Beatles I was a senior in high school. They absolutely defined my college years, and much of the rest of my life. I like the font you used because it's the same as that found on the cover of one of their fab albums, "Rubber Soul." And, btw, great sketch!

thanks for the wonderful pic of john. it's funny that you would mention john and yoko because i was in art school then and we listened to that album every day during class. i shared a birthday with john(i'm 12 years younger). we were both born in the year of the dragon. i remember every detail of that awful night just like i remember every detail of the day kennedy was shot. i was in 6th grade in dallas. both men changed the world. all you need is love.

A few years ago when George Harrison passed away I saw the news report while a passing TV and remarked to one of my (university) students that it was hard to believe that the Beatles were now down to two. She looked at me and asked, "Who are the Beatles?"

I never felt older than that moment.

Jim, I copied John from the Rubber Soul cover, but I turned it upside down and drew him upside down. Does that make sense?

wow, i'm only young, but your sketching is so amazing, when im older i hope that i can sketch like that. You have a true talent.