it's written in the stars 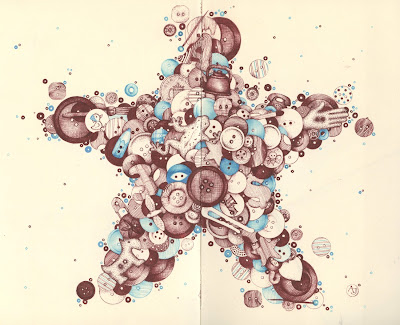 I did post it, for about five minutes, about a year back, when I'd drawn it. But I couldn't bear looking at it. I don't why I disliked it so much back then. Well, apart from the composition - which I still feel is a bit contrived. I remember posting it and then deleting it later the same day.

Today, while I was looking through the Moleskine drawings that I'd saved to a pen drive, I came across it again. And, with a year or so between us I feel that maybe I was being a bit harsh back then. It's not too bad. It's not great. Not my best. But it ain't awful or owt.

So, especially as I have nothing else to post, I thought I'd give it another outing. Better owt than nowt. As they say up North.
Posted by andrea joseph's sketchblog at 11:47 PM

I wish I could get to your "not too bad"! This is just amazing, as usual.

Ooh, I thought I recognised it! I thought it was great (still do!) so I had no idea you had deleted it - strange girl! ;)

To answer your question re the programme, I did watch one part of one show but I just found it so depressing. That magnificent door handle with whistle...it was too much! ;) What did you make of it yourself?

Well I like it, a lot. But sometimes we need a little distance from our own work to really see it.

I remember it! And I loved it! I actually like the star :) Hooray for bringing it back!

This is totally awesome! Matter of fact, I looked at my wife's jar of OLD buttons (and wooden clothespins) today, and it inspired me.

Wow! i love this, you must be a harsh critic :)

that is just one marvelous drawing. and so strangely familiar, your words are ;) i feel the same way about most of the things i create. ^_^

I love It! Sherrie. Still working with one eye since trip to hospital. But murking along.

Yeah, I think it's usually good to have some time between oneself and a drawing. Especially when they take so long.

Felicity, felt totally depressed by the programme. Is there nothing that can't be reduced to a reality tv show?