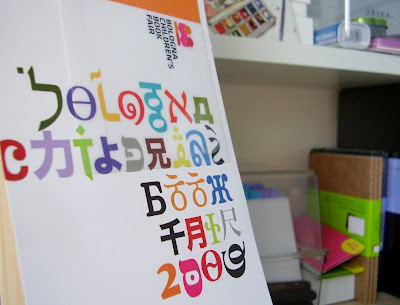 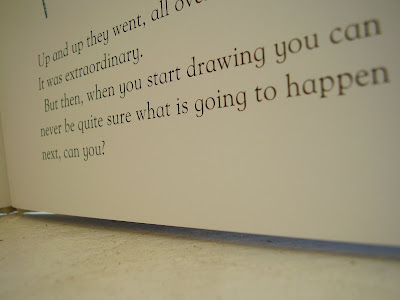 Bye, folks. I'll try and post some photos from Bologna over the next week. And, maybe, I'll draw soon, too. Cheerio, my ducks.
Posted by andrea joseph's sketchblog at 4:48 PM

I have love children's books always, and when you recommended The Red Tree, I had to buy it. It is perfection! I hope your trip is glorious!!!

I am very happy for you!
Totally deserving!
CONGRATS!

Andrea, this is one of the best blog posts I've read, ever. I am excited to hear about what happens-in Bologna and beyond!

Whoopeee! Have a great time out there Andrea!

Have an amazing time. Big congratulations!

Good luck in Bologna! Look forward to reading all about it!
Caroline

No, you certainly can't know what comes next. There's a whole universe in the tip of your pencil.

Good luck and have a great trip. So excited for you. Eileen x

How utterly freaky! My favourite Shaun Tan book is The Arrival - picked it up in the bookshop in the National Portrait gallery!!! Well I never ... Have a wonderful time, come back with loads of commissions and enjoy every moment.

congrats andrea! such an awesome "shift" for you - enjoy!!

Andrea, all I could say - it's fantastic! And it's the magic of drawing!
Keep your colors flying high!

indecI wish you the best in Bologna Andrea! You know, I feel the same way too, that something is happening. Talk to you soon.

Shaun Tan! What's not to like.
Have a great time in Bologna!

Hey, I'm a 'Red Tree Pusher' just like you! Have lost count of the number of people I've given the book to who have screwed up their face when they saw it was a 'children's' book, only to come to me later and tell me how much they'd changed their minds :o)

Even have a freaky Red Tree coincidence story but won't bore you or your lovely readers with that.

Tell Shaun I very unashamedly love him if you meet him.

Congrats!
Enjoy the fair and Bologna, and if you have time go to Ferrara, my beatiful city!

Have a great time! I'm looking forward to hearing all about it.

Oh have fun - we will miss you!

I haven't read the Red Tree -- will hae to look for it!

Hope the book fair is awesome!

Good luck in Bologna! Love the quote, too - so true that you never know where drawing might take you.

I'm so very excited/happy for you about the festival. I hope you have an awesome trip. And if you want us to be your ducks, your duck i will be.

Cheers, everybody, for such kind words.

Stephen, that is possibly one of the most mind blowing books I've ever seen. Can you imagine how many hours went into that book? It hurts my head just thinking about it.

Thomas, YES! We did visit Ferrara and it really is a beautiful city.

Cheers Y'all (that's American, that is).

Sounds like it must have been an awesome trip, Andrea! And very cool about winning that drawing competition (I am not surprised). Love that last line of the book you won, too! :) xo