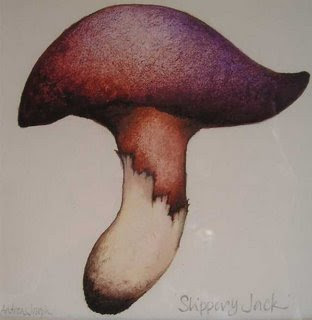 The exhibition season is starting here in the UK. From now until late autumn there will be a series of exhibitions taking place and it's a really good opportunity to have your work shown in some wonderful galleries. The various Royal Societies hold open exhibitions every year and over the next two months they will be calling for entries to the Royal Society of British Artists, Royal Birmingham Society of Artists and the Society of Women Artists. Last year I entered two pictures, to the latter, which were both accepted - this is one of the two. The exhibition took place at the Mall Galleries, London. Her Madge has a little place just up the road. Buckingham Palace I think it's called.
If anyone would like any more information, on how to enter, get in touch with me and I'll try and point you in the right direction.
(Photo courtesy of Tim)
Posted by andrea joseph's sketchblog at 10:34 PM

This is absolutely gorgeous!! No wonder it was accepted. I hope you will show us what you entered when it is over. And LOTS OF LUCK!!

Honestly, I never thought I'd describe a mushroom as gorgeous -- but this one surely is!! The sepia tones are luminous!!

now how exciting is that. I would if I could, but we have you to give us the colorful details. Good Luck

This is a beatiful piece. I'm sure it was framed nicely and I am sure it sold.

It is gorgeous... You'll do great. Also, gotta tell you how wonderful your jacket sketches are... really.

Thank you all - I am proud of this one!

So you should be proud, it's brilliant!

This is so beautiful - how big is it?