have you seen this house? 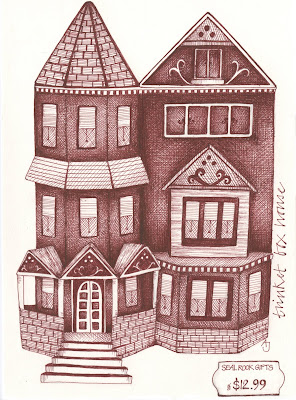 This, actually, is not a house but a trinket box. I bought it in a charity (thrift?) shop some years ago. You remove the roof to put things inside. I've always had a thing for these kind of North American houses. We do not have anything like them here in the UK. I believe they are Victorian houses - and I've seen the iconic images of the streets of San Fransisco (hee hee!). I don't know why I like them so much, I guess I saw them on tv and films as a kid.

This trinket box has a price sticker on the underneath which reads 'Seal Rock Gifts $12.99'. I know that there is a Seal Rock in Oregon. What I wonder is does this house exist? I mean this EXACT house. Imagine it does. Now it's that kind of thought that sets my imagination racing.

Outstanding sketch. Like what you did with the one color.
Nope, haven't seen the house if it actually exists. But I haven't been to San Francisco is over 30 years!

I was in San Francisco a few years ago and we went to Seal Rock Gift Shop. It is right on the beach/coastline west of the city and is located on a rock or cliff. Not sure that this is much help, but it might be a start.

Your draws are beautiful! It is realy a pleasure to visit your blog!
If you wish to see my new paintings and draws visit me!
See you latter.
Stela

:-) Lovely drawing! I never thought of this type of house being a "North American" style -- but I guess it is! Most towns in the US have an area of Victorians, and they are absolutely beautiful, especially if kept up or restored. "Trinket Box House" would be a great name for a big Victorian home!

Now that I've posted this I'm a bit annoyed at the left side of the house - it looks a bit wrong. I'd like to get a ruler on it! Anyway that's the obligatory self criticism out of the way!

I can't believe it; two people have told me they have been to Seal Rock Giftshop! Isn't the internet just brilliant!!! Wow Jen it certainly is a start, next the house...

Linda - they really are beautiful houses. I wasn't aware that most towns had them.

Thank you all guys for the comments and information.

Andrea, it might be a portion of the original Cliff House in San Francisco, which is where Seal Rock Gift Shop is now. Here's a site where you can see some old postcard photos of the place:
http://www.sanfranciscomemories.com/cliff/house.html
You did an outstanding job on this sketch - I love the sepia ink!!

I have never been to SF but you sure stirred a lot of interest in your house. What a neat "Trinket Box House"

WOW-I love your style-such detail-I found your blog while searching online-just wanted to compliment you on your work :)

Thanks for visiting and leaving such a nice comment! And if I find out more about that flicker group, Ill tell you! I'll be back for a visit. Your work is really beautiful!!

Thank you guys for the kind comments.

Brenda - I wonder? Very nice link. What an interesting place. I'm very excited about all the information I've been recieiving! I can't wait for the day when I make a trip - house hunting in Seal Rock!!

Cheers guys - I love recieiving your comments - they really make my day!

Another great one, Andrea. I love the details and the toy quality of this house! I want to bring some miniature cars close by. :-)

Oh bother, my comment went. Any way yes I have been to the seal rock gift shop and there were lots of touristy type houses there so dont know if it was a real or imaginary one. You would have fun looking for it, I took masses of photos and there was a public transport bus out through all tha area. Magic.Love the sketch.

If you do make it out to SF, I'd love to join you on a trek to Seal Rock Gift Shop. I live across the bay from SF but my niece lives very near there. Most of the Victorian houses aren't in that area by the ocean though, they're more in the middle of the city. Your drawing is delightful and really captures the all the gingerbread of a Victorian. Thanks so much for your very nice comments on my blog and your feedback on the postcard question.

I'm getting more and more excited about my (imaginary)trip to SF to find this house!! Jana I'd love to accompant you to the gift shop - AND yes, you're so right there is a definate gingerbread quality to these houses. Now I need to go out and make some money to fund this trip of mine!!!

I have a lemon yellow and white cookie jar house that looks a lot like that! The roof comes off in one piece to put the cookies in.
Nice work!

Well it makes perfect sense now that you thought this looks like a Painted Lady (that's what they call the houses in San Fran) as Jen says there is a SealRock gift shoppe on the coast in San Fran! You should be a detective on the side! Love this charming drawing!

Andrea, my husband and I have a house in Seal Rock, Oregon...and I can tell you, none of the houses there look anything like this. Our coastal homes have a charm all there own, but very few are even this big! I suspect everyone is right in steering you towards the Seal Rock in San Francisco. But when you visit, perhaps you might like to come visit our Seal Rock also? :)