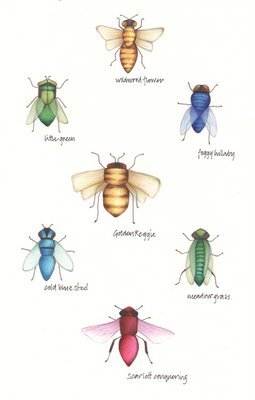 Today I decided to draw something completely different. Something that I'd never attempted to draw before. I have taken some creative license with these. I found some insect shapes, played around with them and added some bright colours with ink. I think they look quite jewel-like. The names were also made up. Actually, they were not so much made up but totally robbed from, erm, Joni Mitchell. Don't tell her though. I hear she has quite a temper.
Posted by andrea joseph's sketchblog at 7:48 PM

Your sense of design is really strong -- and I love your handwriting.

Andrea - this is fantastic. It should be a print or poster. I love your style.

Thanks so much for visiting my blog. I really like your style. It's whimsical and fresh.

Gorgeous, Andrea, gorgeous. How big is this drawing?

Thanks everyone for your kind comments. France, this drawing/painting is A4 size. You seem to be able to enlarge this image to it's full size if you click on the arrows. I still have no idea why you can do that with some pictures and not others??? Anyone know why this is? Cheers all.

These are just awesome!

oooh, d'uh. I see the size now! Funny how blogger works. In Typepad, it just depends on the size that i save it in. Oh it's gorgeous when it's enlarged, of course -- and it gives me an idea how you work.

These are just great--such a creative idea and beautifully executed, and really fun to look at.

I LOVE this. So clean, so beautiful. A very nice fit for your style.

Beautiful, fun work. "Golden Reggie" made me giggle when I read it.

Ilike some of your work i suppose it takes time to see where you are coming from, you are certainly very busy,I would like to see more of your work so I will keep looking

dont give up the day job yet, only joking DANIEL Tesco Man

You do nice work.

Thanks for stopping by my blog. I didn't see anything here about Joni, was I supposed to?

Anyway - stop by my place anytime and I will check back here periodically.

Thank you everyone for taking the time to comment. This picture really does need to be enlarged to be seen better.

Daniel - thanks for your veiws.It is always good to get veiws from people not working in the arts. I guess the drawings do seem quite erratic in style and subject. I think that is the beauty of this group - just testing out our skills on random subects that we might not normally be inclined to draw. I think it is a way of growing and a journey toward our authentic style. Thanks anyway.

Al, thank you for visiting here, I always enjoy reading your blog and look forward to your new posts. They are in fact all names that I took from Joni songs 'Little Green' etc. Some are probably more obscure than others. It was actually how I found your site by Googling some Joni lyrics.

I really appreciate everyone stopping by and especially taking time out to comment. Cheers!

Hi Andrea, I found a post from you on my blog today, so I thought I would "check you out." I love your art!!! Wow, I really like the elegance one can achieve with "simplicity." You do that, and you do it very nicely. I am a biologist, by training, and what you have done with these flies is WONDERFUL! Science is often so cold and precise; you've given it warmth and creativity with your sketches. I would love to have this framed and on my wall.

love you little "bee jewels" - that's what it reminds me of. you could definitely make great kid's t-shirts or Tea Towels.

Wonderful, if I'm not wrong your first JM mention. I'd like have seen this a year ago, at the moment you made it. Your evolutions has been spectacular!