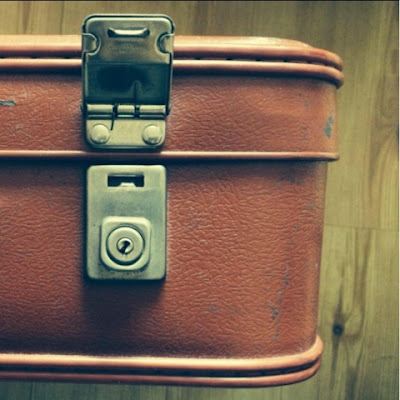 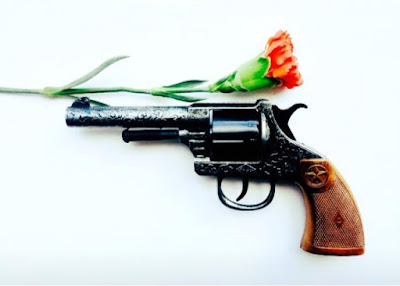 'The Shooting of Hector Littleton'
Well, laid up in bed with a chest infection, coughing my lungs up, wasn't how I'd envisaged the start to my New Year. I'd wanted to start all guns a'blazing, but the Universe had other ideas. 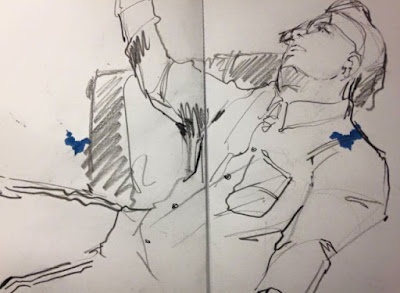 Poor vain Hector,
(drawing by Tracy Fennell Illustration)
I love New Year. It is, without a doubt, my favourite of all the holidays and birthdays put together. I love all the possibilities and opportunities a new start begins. There's nothing I like better than a new chapter or even a brand new (sketch) book. 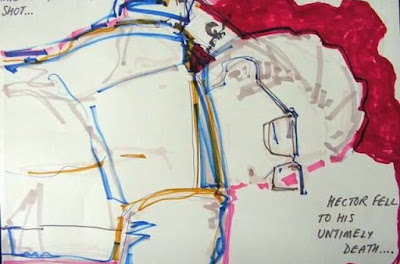 But lying here, gives me some time for reflection - which is yet another good thing about a New Year. 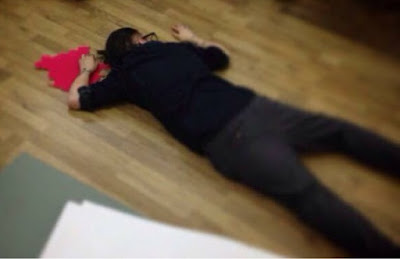 ...meant he had no time to enjoy his ill-gotten inheritance.
2015 saw so many changes for me. Big changes. And one of those big changes, perhaps the biggest, was that I gave up my job to become a full time illustrator. 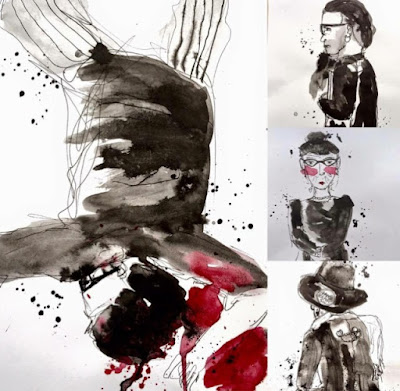 Somebody wanted that case and would go to any lengths to get it off him.
(Drawings by Karrie Brown)
This was not a decision I took lightly. I'd battled with it for years. And years. Making every excuse in the book not to do it. But I'd just got so bored of hearing myself talk about it. 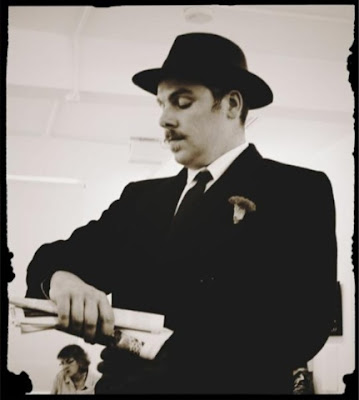 On a train station on the other side of town a brief encounter was about to happen
(Photo by Karrie Brown)
Then, on New Year's Day last year, I just woke up and I took the leap. I made the decision. I wasn't going back to work. Job done. 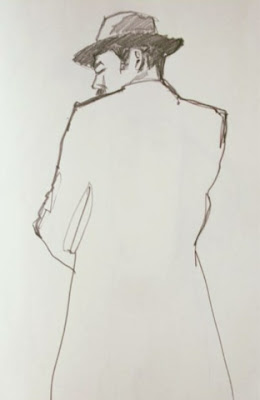 But would she turn up?
(Drawing by Lynne McPeake)
I was now a full time illustrator. Yay!!!! Argh!! Shit! YAY!!! 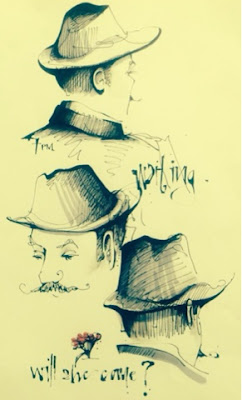 He waited. And waited.
(Drawing by me)
I had no back up plan, hell, I had no plan. And, I had no money behind me, I had nothing. Not a bean to my name. All I had was this faith that somehow it would work out and this overwhelming belief that it was the right thing to do. 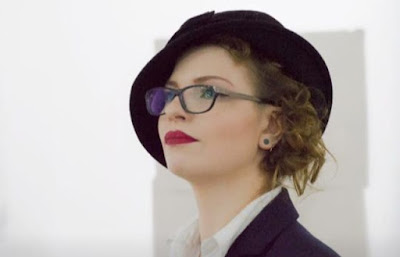 Then she came
(Photo by Rod Walton)
And sometimes that's the best place to start. There's something quite beautiful about being in that place. 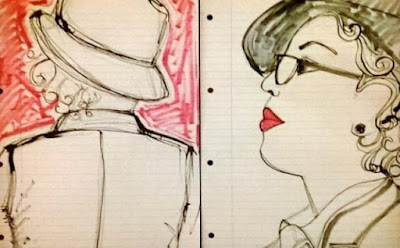 But had she brought what he wanted?
(Drawing by Kate Yorke)
But it hasn't been easy. Far from it.
But when is anything? Anything that means anything? 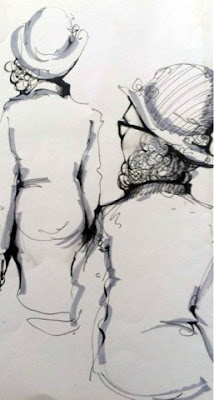 There was no sign of the red case
(Drawing by me)
I was prepared for that.
And I was prepared to be poor. I'd been practicing at that for quite a while. 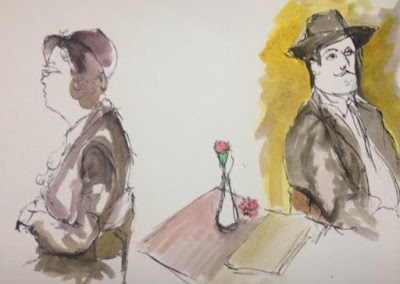 They moved into the café
(Drawing by Becky Field)
But even though the stress about having no money continued (and still continues) everything else became better. Since making that decision everything improved. Finally I was doing what I wanted to do. What I was meant to be doing. 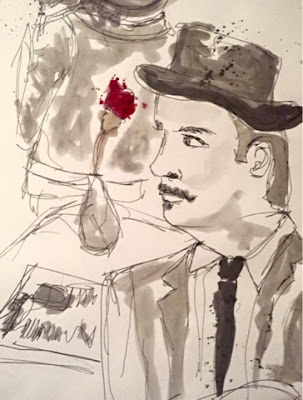 And, it's required me to be more, much more, creative. Not just as an artist, but how I live my life. I have to be creative in the way I spend my money and in how I make my money. And the latter has been a revelation. 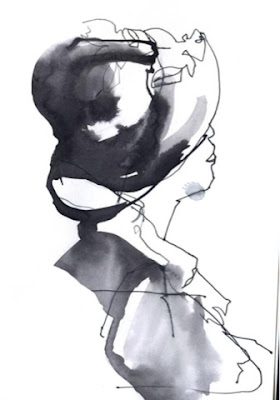 He had the money but did she have the red case?
(Drawing by Tracy Fennell Illustration)
It was no longer feasible to just draw, and to hope that I might get some sales or commissions. I had to look at other things - things I'd learnt and how I could utilise them to bring in an income. 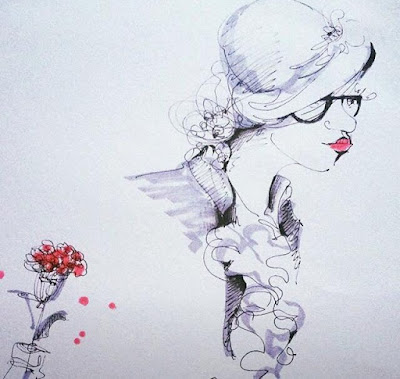 She came up with the goods
(Drawing by me)
I started using my creativity in ways I'd never have dreamt of. Bringing all of the things I'd learnt, all the things I was skilled at, and was good at, together. With some extraordinary results. 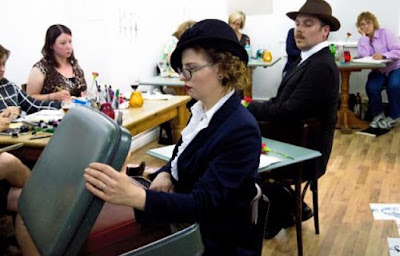 And there it was
(Photo by Rod Walton)
My favourite of which has to be this crazy idea I had for a series of alternative, costumed, life-drawing sessions, which had a narrative (that I'd written - in my head) running through them... 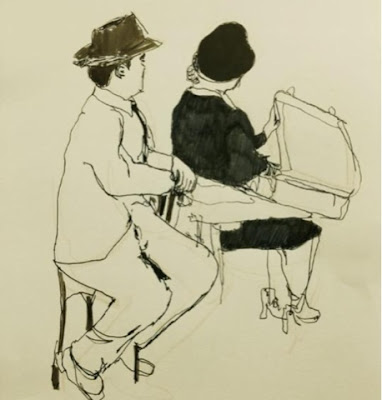 The red case inside the green case
Drawing by Liz Ackerley
...passed on from model to model by via a little red case, and that included a lot of people getting shot or hit over the head with candlesticks and Prime Minsters getting involved with showgirls and...and...well, yeah, oh.... 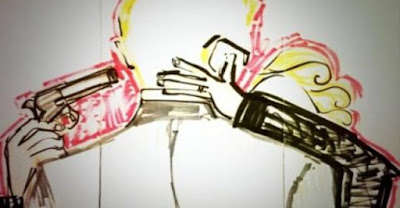 ...and not to mention spies falling in love with each other. 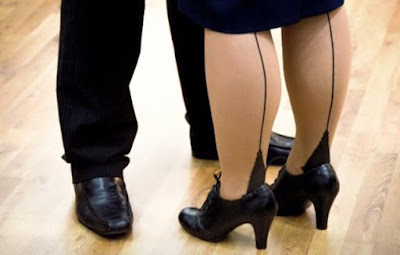 This pair were falling in love
(Photo by Rod Walton)
I mean, who could have predicted all of that? 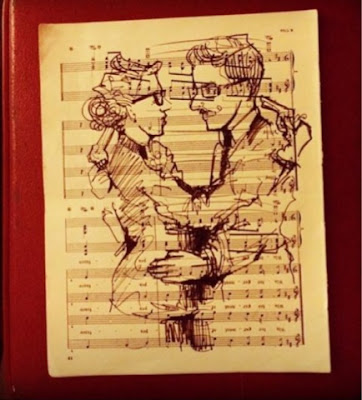 But can two spies truly fall in love?
(Drawing by me)
So you see, the craziest things can happen in just a year... 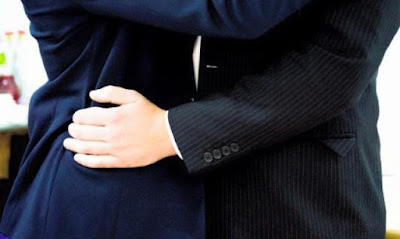 How could they ever truly trust each other?
(Photo by Rod Walton)

...when you take the leap of faith. 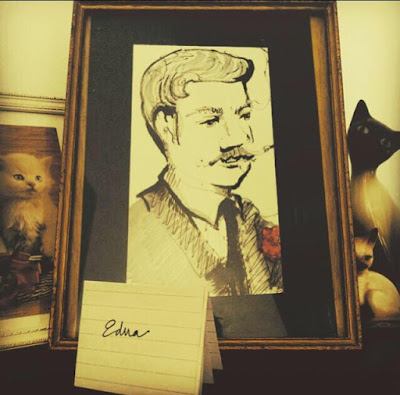 And 2016? Well, I intend to make even more crazy things happen. Lots more.
Oh, and it would be nice to make a bob (buck) or two along the way too. That's the aim. 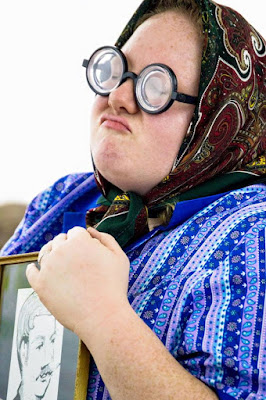 And then there was Edna
(Photo by Rod Walton)
I must say a HUGE thanks to all of the sketchers and amazing models who have made this project an absolute joy and one of my proudest achievements.
I CANNOT wait for the new series set in a swanky New York apartment block in the 1970s to start in Feb. Let your creativity have no limits and it'll take you to amazing places too!
Hector Littleton played by Mike Cross
Michael Mann played by Christopher Freeman
Eliza Day played by Kayleigh Amos
Edna played by Kristina Parkin
Posted by andrea joseph's sketchblog at 1:10 AM

I'm so glad this year has worked out so well for you Andrea. You've been one of my sketching inspirations for many years and you deserve to be a huge success. I've so enjoyed following the story of the Red Case through sketches and photos on Facebook and Instagram - even from hundreds of miles away in the South of England it's been a hoot! Even as a voyeur I've had so much fun with it and I can't wait to see what follows in 2016.

Congratulations on a great year and I wish you continuing success in 2016.

What a fabulous idea and (excuse the not-quite-pun) execution. Are you a mystery reader, for this suggests you are, bringing all your loves to the front lines? Wishing you a most prosperous and joy-filled 2016. xo