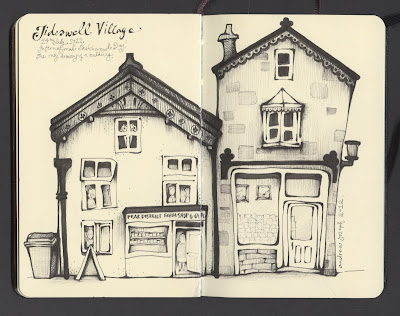 Saturday the 14th of July was International Sketchcrawl day and whilst most of the world's sketching population were in Santa Domingo some of us (Sketchcrawl North, specifically) were out on the mean, and equally exotic, streets of Tideswell.

Well,actually that's a bit of a fib.

No, we weren't on the streets at all. We were mainly in the church where some (amazing) musicians were practicing for a concert. So we spent most of our time there. I did, however, sneak this little drawing of some architecture. Just to prove that we did actually go out sketching on the big day.

The rest of the day we just spent in the cafe eating. Now, that's one thing Sketchcrawl North are VERY good at.
Posted by andrea joseph's sketchblog at 10:57 PM

Ha ha urban sketches do seem very good at eating (and drinking) judging from my short experience here with the Barcelona sketchers and back home.