what do you feel? 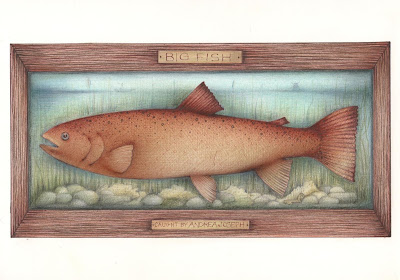 One thing you may not know about me is that once I caught the biggest Goldfish in the world. Well, I sort of caught it. One day Grandpa and I were out fishing. Well, Grandpa was fishing. I don't fish. I couldn't handle the guilt of it. So, I was just there - thinking and day dreaming. I put my hand over the side of the boat and something bit my finger. I thought I'd imagined it at first, but then it happened again. Then I saw Henry. Henry the fish, that is. Although he wasn't called Henry then. I'm not sure he even had a name. Well, the bite on the finger, it was more of a nibble if I'm honest, was actually a cry for help. I could see he had a badly broken fin. So I took him home to recuperate in my garden pond. Actually, I say garden pond but, in fact, I have a lake at the end of my garden. There he lived happily for 57 years. When he died I used my experience as a part time taxidermist to stuff and mount him. Then I drew him. Obviously.
Posted by andrea joseph's sketchblog at 6:25 PM

A fishy tale that I nearly fell for hook, line and sinker! ;) Sorry! Brilliant drawing though!

Obviously - you had to draw him! (with a tale like that to tell). A bit of a change from your usual subject - but just as delightful

What a nice story...and a beautiful beautiful drawing. Love the details on the frame, it's magnificent!

Ha, ha, hilarious! Made my day ; ) Actually thought it was going to be a Bible story from the title~~Lovely drawing, by the way.

Hi dear Andrea! I am so interested you like to eat fish!??? Have you seen once one big whale?

Your pants are well alight!love the drawing, and the tale :-)

It must have been his
'tale' fin that was damaged!

Another lovely slice of Aj's humour.

Haha!! You had me going at first! This is wonderful; I love the sketch!

Ha! Sounds fishy to me! Don't believe a word of it! But love the fish! The warm on the cool background, makes it look like it is extending outward from the frame. And as always, love you unique crosshatching.

He looks like a very contented fish, and no wonder since he had such a long happy life! I enjoyed the tale and the painting.

Great little story... and lovely drawing - as ever. You nearly reeled me in. Had to get a pun in somewhere :o)

Told like a true fisherman. Must have learned that from your Dad. Nicely done.

Glad you liked this old family story. I'll have to dig some more out.

Cheers. You make my day.

Are you sure he wasn't a trout, and not a goldfish? In any event, I am sure he was VERY thankful for your good deed!!